M81 has announced version 4 of his flagship product:

Find below the description of ‘Flash for i’ V4 product

and view the recorded videos of the webinars [here]

Detail of the version 4 of the well-known “Flash for i” product: to enhance the usage of External Storage

Available for 5 years, installed in more than 200 LPARs in 12 countries, you certainly already know the ‘Flash for i’ product.

It brings to the IBM i the extremely powerful SnapShot/FlashCopy function (= instant copy) of the external storage units.

Mainly the usages of such a product were to completely automate the creation of a clone of your IBM i partition, and on this clone partition to do: 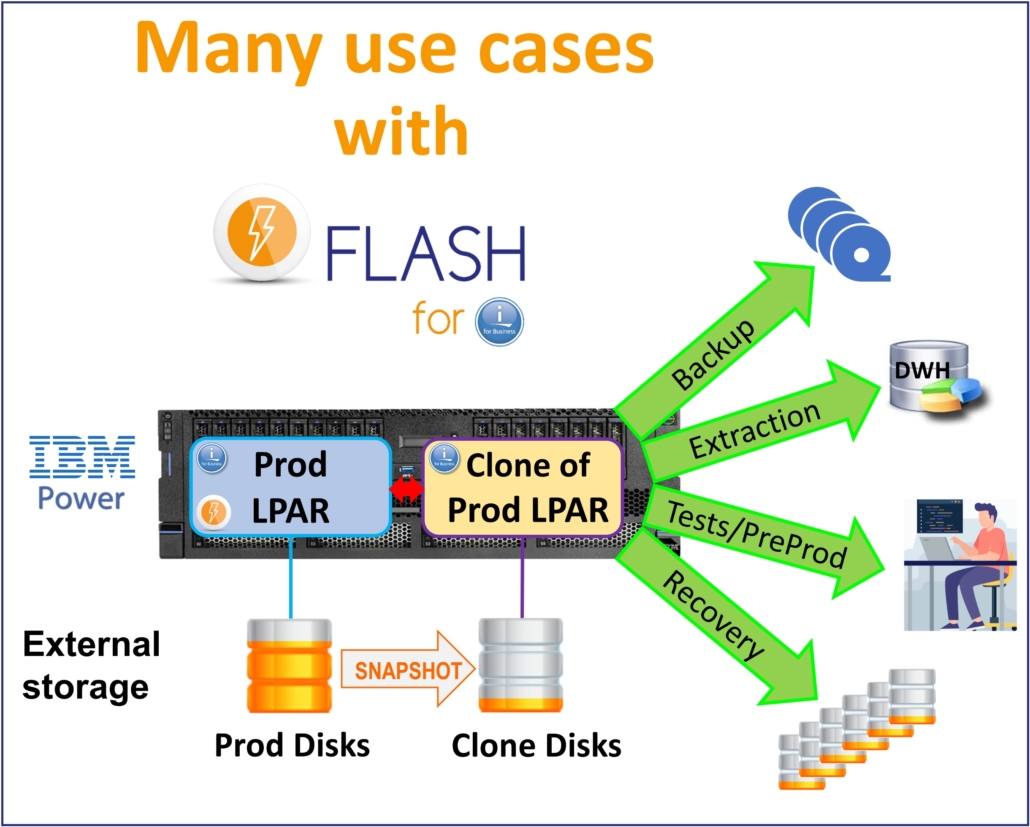 Years after years customers usage change and the new version 4 facilitates this evolution; ‘Flash for i’ v4 enhances the ability to automate the creation of a complete NEW partition in order to use it for many “long term” uses and not any more just to do a backup or a data extraction. The potential New partition could be :

Note: another clever ‘IBM Spectrum Virtualize software’ function is to allow “cascade cloning”. With it (and ‘Flash for i’) you can clone your production disks, then start an anonymisation process (with a third party product) on the New clone partition, then you have a “reference anonymised partition” on your disks (still occupying little space). And you can then clone this partition again to provide refreshed partitions with anonymised data to different teams : developers, testers, validators,… (3 more clones in this example).

Another interesting usage is to ask to ‘Flash for i’ to clone the replicated (or mirrored) disks on the HA server. ‘Flash for i’ can then configure the Cloned partition so that users can run tests on it to validate the accuracy of the replication/mirroring, without stopping the replication/mirroring process and without the need for a role-swap… The completeness of the tests is not as good as with a role-swap, but it is much more easy to organise.

Secondarily, the version 4 provides support of other manufacturers than IBM. From now EMC vMax/PowerMax storage and PureStorage FlashArray are running behind IBM i with ‘Flash for i’.

Other new features are also available as:

This new version 4 has been presented during many webinars, beginning of March:

French virtual event : “iBelieve – Present and Future of the IBM...
Scroll to top